THE FIRST SAWING A WOMAN IN TWO? 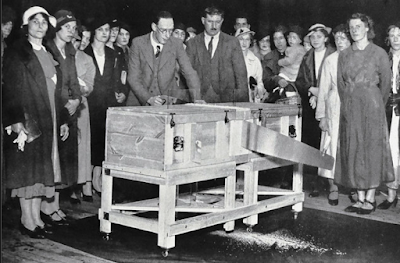 There has been a lot of debate about who created the first Sawing Through a Woman illusion. And it has now been 100 years since P T Selbit debuted his version in January of 1921.  The illusion was a sensation but this didn't stop some magicians questioning the originality of the effect. Hadn’t Robert-Houdin mentioned such an illusion in his memoirs back in 1868?  Didn’t the Hanlon Brothers do the trick at the Follies Bergere in 1878? Robert-Houdin's trick was a product of his imagination and while the Hanlon Brothers did patent a dismemberment illusion in 1890, I don't think anyone has evidence that they performed what we would categorise as a sawing illusion.

None of the discussion, much of which seems to be mischievous rather than analytical, unearthed a sawing illusion that predated Selbit’s. And even if they had, it would not detract from the fact that it was Selbit’s invention, and his clever publicity, that made the sawing illusion one of magic’s most iconic feats.

However, one piece of information that seems to have been forgotten was unearthed by Houdini. He published a very interesting article in the M.U.M. magazine for September 1921 (Vol 11 No 3). Houdini had in his collection a playbill for a Prof Hengler and a show at the Winchester Music Hall in London. It advertised an effect titled ‘Sawing a Lady in Two.’ 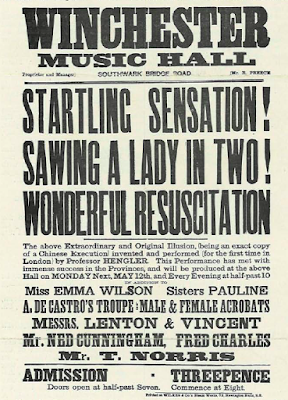 The playbill is undated but Houdini estimated it to be from the early 1800s. No one seems to have looked into Houdini’s playbill so I decided to see what I could find out via the various newspaper databases that are now available.

Dr Eric Colleary, Cline Curator of Theater and Performing arts at the Harry Ransom Center, The University of Austin, Texas, emailed to say that the actual poster is in their collection. With the permission of the Harry Ransom Center the poster is reproduced here. Incidentally, they have some wonderful Houdini ephemera available for viewing on the department website including some of Houdini's scrapbooks.

Searching for Hengler  showed that Professor Hengler was Alfred Hengler. I'd assumed he was from the famous Hengler circus family but this is an ongoing enquiry.

According to John Stewart's book The Acrobat (2012), Alfred Hengler was the brother of Charles Hengler, the man who founded Hengler's Grand Cirque. The London Palladium is built on the former site of Hengler’s Grand Cirque which had been there since 1871. I haven't done a deep dive but I haven't seen anything to show that the Hengler family had any interest in magic. They were equestrian acrobrats. And there are reports that one of the family named Alfred Hugh Hengler died in 1842 after a fall from a horse. Yet there is an Alfred Hengler still in the circus business in the 1880s. Maybe someone who is familiar with the Hengler dynasty can provide some clarity.

Chris Woodward referred me to the books by John Martin Turner on the history of circus. His papers are at the National Circus and Fairground Archive. Chris found what appears to be a reference to a magician called Alfred Charles Hengler in volume 2 of Turner's Victorian Era - The Performers: volume 2. Perhaps this is our guy. Chris also sent along an advertisement for the opening of Hengler's Cirque in 1871: 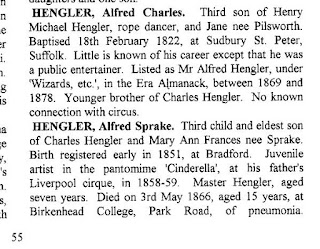 Alfred Hengler was a magician who had been performing since the mid 1860s. Press advertisements and reviews show that he was good at his job and noted for his sleight of hand, instantaneous growth of flowers, and the Indian Basket Trick.

But in 1873 he advertised a new routine, ‘Cutting a Lady in Two.’  The first advert I’ve found appeared in the Hampshire Telegraph and Sussex Chronicle on 1st February 1873 for a performance on 3rd February at the South of England Music Hall, St Mary’s Street, Portsmouth

'MR ALFRED HENGLER, in his new Grand Magical Illusion Every Evening, Cutting a Lady in Two – A Feat never attempted before. All should see this wonderful illusion.'

The South of England Music Hall was no small town theatre. It was built to rival London theatres and seated 2,000 people. It was said to be Hengler’s first appearance at the venue. He had been performing there in January but the illusion is not mentioned until February after which it makes appearances in several small advertisements.

A brief note in the same newspaper on 15th February says:

'SOUTH OF ENGLAND MUSIC HALL – The principal attraction at this popular place of entertainment are the wonderful feats of Mr. Alfred Hengler, whose crowning illusion is that in which he appears to cut a lady in two.'

A final advert, on 19th February, advertises the ‘last six nights’ of appearances by Alfred Hengler.

It is possible that these performances are the provincial shows mentioned in the playbill. I can’t find any other shows. More importantly, I haven’t found any reports of Hengler appearing at The Winchester Music Hall in May 1873 though De Castro’s acrobatic troupe, also mentioned on that playbill, did.

At the moment we have no idea what the trick looked like. The title ‘Sawing a Lady in Two,’ appears on the London playbill but not during the performances in Portsmouth. More material might come to light as more newspapers are digitised. New material is being digitised all the time and some archives will even alert you when new items for keywords you have already searched for have been added to the database.

This year is the 100th anniversary of the invention of Selbit's illusion, a fact that will be celebrated by a broadcast from The Magic Circle. You can read more about that here:

Finally, in his 1921 article, Houdini wrote, 'we must hand Prof. Hengler the palm for at least inventing it before present day disputants. Perhaps Houdini was right.

Since I uploaded this post yesterday a couple of notes have come in. Richard Wiseman pointed out that the Chinese method of execution supposedly involved being sawn vertically down the body not across the midriff. Searching for reports of that in the British Newspaper Archive I found an article from 1870 of a visit to a sort of wax museum in Canton that was circulated in several newspapers (Strange Sights In Canton - The Clare Journal 14th July 1870). The method of execution, of being sawn while held between two planks, is briefly mentioned there. It's pure speculation but maybe an article of this sort inspired Hengler's illusion. Wikipedia has a page on the gruesome business of death by sawing.

Bill Mullins emailed to say that the date on the playbill is Monday 12th May. The only days on which the 12th of May falls on a Monday around that time are 1861, 1873 and 1878. Given what we know I think this confirms that the playbill is from 1873.

Talking of the lengthwise sawing, I remembered that Billy McComb had such an idea in his book McComb's Magic 25 Years Wiser. He wasn't the first but in the book he mentioned a competition that Dunninger ran in Scientific American in the 1920s. Billy had misremembered the name of the magazine, it was actually Science and Invention.

Dunninger had a regular magic column in Science and Invention where, to the consternation of some, he explained many tricks. In the September 1929 issue he ran a reader competition to devise a method for a lengthwise sawing illusion. First prize was $100.

The issue has a vivid cover illustration of Dunninger performing the effect which he described in great detail saying that it was a trick he had intended to perform in vaudeville and that it had never been done before.

The magazine reported that they received more 10,000 entries to the competition. In the March 1930 issue they announced the winner, a Mr A. G. Illich, and published his method which, I have to say, was not half as exciting as the effect. But then isn't that often the way? 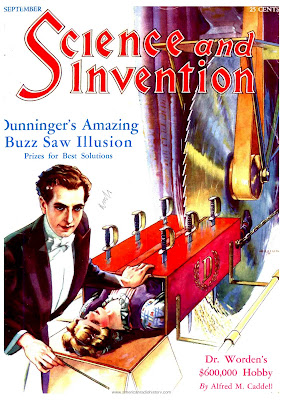 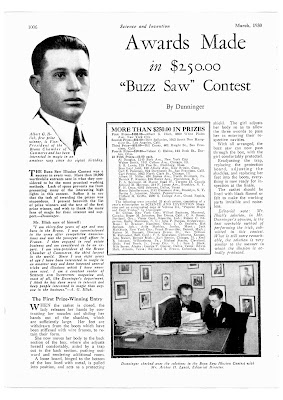